The Greater Seattle metro has certainly done its share of the heavy lifting. The region’s unemployment rate stands at 3.4%, while in King County the figure is a 2.9% handle. As for the GDP, the most recent figures from the U.S. Bureau of Economic Analysis and Federal Reserve Bank of St. Louis, indicate a robust $357 million output and a stellar growth rate of 5.2%, which rivals the expansions of other high-flying metros in California and Texas.

This phenomenal economic environment has added a dynamic energy into the area’s commercial real estate sphere. There is no better example of this vibrancy than in the office sector, which has experienced a stunning expansionary trajectory.

From the metrics, Seattle metro’s office segment is as hot as anywhere in the nation. The Emerald City’s commercial business district carries an 8.7% vacancy rate, and an accompanying average Class A asking rate of $52.03. Both vacancy and rental rates continue in a multi-year growth trajectory.

Ten miles away across Lake Washington, via Interstate 90; Bellevue is ascending as one of the metro’s powerhouse hubs. Home to the tech giants: Amazon, Apple, Facebook and Google, the bustling commercial business district boasts vacancy at 5.2% and an average asking rate of $57.05 for Class A space.

There is no bigger player in Greater Seattle than Amazon, which employs over 45,000 team members in the region, with plans to add 10,000 more by the close of 2019. Seeing enormous opportunity in Bellevue, company leadership recently announced plans to migrate its Worldwide Operations division to Bellevue, reach 4,500 personnel by year-end and manage capacity of up to 30,000 staff members by 2023. The company plans to occupy what will be the tallest office structure in the city, at 43 stories and 1 million square feet, the Bellevue 600.

Back in the city of Seattle; the communities of South Lake Union, CBD, Queen Anne and Denny Triangle remain vigorous centers of commerce. Apple snapped up 630,000 square feet at 333 Dexter, while Dropbox took 120,000 square feet off the market at 2+U. Meanwhile, under the shadow of Rainier Tower, expected to be completed by 2020, Amazon exited their commitment to occupy over 700,000 square feet of space. The upshot…the owners will likely be leasing the tower for a second time, all before construction concludes.

And a newcomer to the party is gaining attention. The Northgate section of the city is undergoing a transformation with the Northgate Mall parcel being redeveloped into a massive mixed-use offering including 1 million square feet of office, and a large retail and multi-family footprint. The property will also serve as the site for the practice facility of the NHL’s most recent franchise, which is yet to be named!

This is a definitely a community that will be on the radar screen.

As the economic cycle churns on, the Greater Seattle commercial real estate market shows no signs of slowing. In 2019-2020, a pipeline of 8 million square feet of office comes to the metro and the Eastside.

This is certainly an exciting growth story, and one to follow, as the longest ever economic expansion moves closer to 130 months. 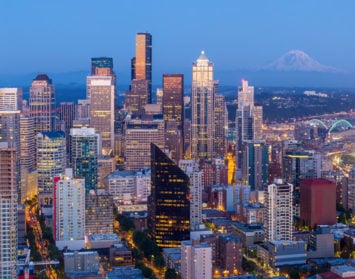