The third quarter of 2016 brought sighs of relief and renewed optimism as over 1.4 million square feet of office, lab and industrial space came off the market in San Diego County. This gain wiped out the 730,000 square foot increase in availability that the market experienced in the combined first and second quarters of 2016. It looks like the market is back on track with the pace that we saw back in 2013, 2014 and 2015, as typically 750,000 to one million square feet would come off the market quarterly during such time. To understand what is driving the different product types – office demand has stalled in the region, particularly in the central county submarkets of Del Mar Heights, UTC and Sorrento Mesa.

Sorrento has become the softest office market in the County, ending the quarter at 24% availability, which marks a four year high. While having the best amenities in the region and some of the best freeway egress/ingress, UTC has stayed soft due to the large amount of office space construction that has occurred in the last year, ending the quarter at 19.4%. The Irvine Company has led the UTC market in reducing asking-rents and in grabbing market share from other landlords in the region, including tenants in Del Mar Heights and Sorrento, looking for improved economics and some of the best quality office projects in the region. Office space demand has also turned the wrong direction in Carlsbad, where Q3 availability ended at 22.5%, a three year high. Offsetting those increases in office space availability, the I-15, Mission Valley, Kearny Mesa and Downtown have all ended strong with reduced availability rates closing out at 13.8%, 13.9%, 14.1% and 17.5% respectively.

While on the surface the Downtown submarket looks fairly soft, the reality is quite the opposite. There is very little space available in Class A buildings – and most of what is “available” is in advanced negotiations for long-term leases. Even Class B space has been rapidly absorbed – and further absorption will soon be announced. In the first half of 2017, we will see a massive reduction of space available in downtown – and continued hyper-escalation of rental rates.

At the macro level, what is mostly driving down the total availability rate in the region across the combined product type data we are tracking is the demand for both industrial space and lab space. While the stock markets have been bumpy for the life science industry, there is still strong growth of large biotech companies in town, and a few examples of companies moving operations to San Diego from other parts of the country or abroad. As for industrial space, the filling up of the supply chain of companies across industries keeps chewing supply off the market throughout San Diego County, resulting in industrial supply shortages throughout the Central County region, particularly in Miramar, Sorrento and Kearny Mesa. We expect the fourth quarter to show an ongoing reduction in availability based on the demand we see in our own client base, particularly with life science and technology companies, and also manufacturing and distribution related businesses. As we begin to peek into 2017, we expect availability to continue to trend downwards, as over half of the current lease negotiations that Hughes Marino has ongoing are for 2017 occupancies, and we are seeing strong demand for space and an overall high confidence level of executive teams and business owners.

For those looking for values in the market, it used to be that the sublease inventory always offered options for those looking for deals, but those days are generally long behind us. Total sublease space in the region closed out at 3.7 million square feet in the region, which has been essentially flat for the last four years, and shows what equilibrium looks like. We will continue to track the total amount of sublease space that is on the market, as any uptick in that category will surely be the leading edge of a turn in the market. 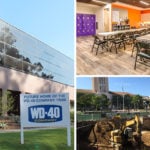