Seattle closed out yet another quarter of positive rent growth and positive net absorption fueled by the continuous growth of technology tenants, a common theme over the past few years. In the first quarter of 2019, there were 117 transactions in downtown Seattle totaling approximately 700,000 square feet. Those most notable were WeWork’s +/-70,000 square foot lease at Fourth & Madison, coworking firm Spaces’ lease of the Ainsworth & Dunn Building (also known as the former Old Spaghetti Factory building), and Sonos’ +/-40,000 square foot lease at 800 5th Avenue. Given the leasing activity and robust economy lease rates for Downtown Seattle have surged to an average of $48, up $1.00 per square foot from this time last year. Vacancy remains steady at 8.1%, which is 2.6% lower than this same time last year.

Amazon continues to make the news in the Puget Sound because of their continued expansion into the Bellevue market. Amazon has leased 1.7 million square feet in Bellevue among multiple properties, most recently signing a lease at Trammell Crow’s permitted development located at 1001 106th Avenue NE which will soon be a 15-story, 715,000 square foot office project which is scheduled to deliver in 2022. Shortly before signing their office lease with Trammell Crow for the aforementioned property, Amazon closed on a $195 million purchase of Bellevue Corporate Plaza located at 600 108th Avenue NE, a 10-story building that resides on a 3.5-acre parcel. Amazon can build up to a 600-foot-tall tower on that site which many believe will happen to satisfy their insatiable demand for office space. All told, Amazon is on track to have enough office space for as many as 25,000 employees in Bellevue by 2023.

Earlier this year the famous Alaskan Way Viaduct closed having been replaced by the SR 99 tunnel to make way for one of the most anticipated waterfront redevelopments in U.S. history. Many believe that the Seattle waterfront will become the one of the most sought-after submarkets along the West Coast given its incredible views and proximity to the central downtown core. Companies have already started moving to the waterfront, such as Big Fish Games, in anticipation for what’s to come.

Looking ahead, we believe that despite the ever-increasing office market lease rates over the past three years, we’ll start to see more moderate rent growth given increased delivery of space, possible slower employment growth and a looming presidential election in 2020 which may breed uncertainty into the capital markets. While investor confidence in the Seattle area remains strong, investors are starting to express caution with regards to their outlook for long-term rent growth in our core submarkets. The Strategic Placement of Kitchens in the Workplace 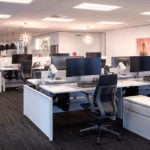